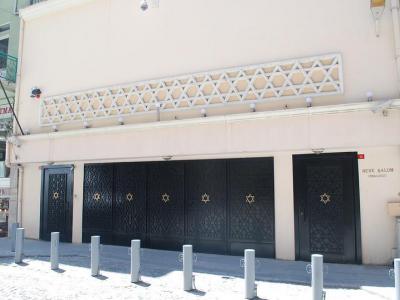 While this little gem could easily be overlooked, it is well worth visiting if you're interested in a centuries-old Jewish presence in a centuries-old Ottoman culture. Only a few minutes walk from the heart of modern Istanbul, Istiklal Cd., it houses the only Jewish museum in Turkey, having still preserved the unfortunate bullet holes and bomb blast damage from three separate terrorist attacks (1986, 1992, 2003) – albeit these are sealed up with heavy-duty steel to obscure them from the public.

Apart from showing how the Turkish Jewish Community was established and how open and accommodating previous Turkish rulers and governments were to Jewish people, the museum also provides good insights into traditional Jewish life and the contribution Jews have made to Turkish society over the decades and centuries.

The synagogue itself doesn't look that charming (and isn't really noticeable) from the outside, but once you enter the building you will notice its striking stained glass windows (imported from the UK and especially designed by the Academy of Art) and the stunning eight-ton chandelier that hangs from the dome – a loan from the Buenos Aires Jewish community that has also sustained brutal attacks over the years.

Tip:
No need for advance appointments, but to get in (Sun-Fri) one must surrender one's passport and go through security screening as part of security measures.
Image by Chadica on Flickr under Creative Commons License.