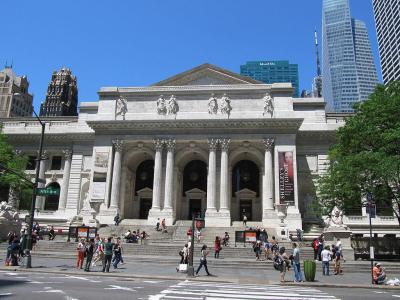 The New York Public Library (NYPL) is the second largest public library in the United States (and third largest in the world), behind only the Library of Congress. It has nearly 53 million items, and is an independently managed, nonprofit corporation sustained with both private and public funds, with branches in Manhattan, The Bronx and Staten Island.

The NYPL main building was designed based on a rough sketch created by its best known librarian, Dr. John Shaw Billings. His idea was a large reading room at the top with seven floors of book stacks and stairs that would make one of the swiftest book delivery systems in the world. The plan was formulated by architects Carrere and Hastings in a Beaux Arts style. The site chosen was a redundant reservoir and the workers spent two years dismantling and making it suitable for creating a library. Construction began in 1902 and the library opened its doors in 1911. At the time it was the largest marble clad building in the U.S. On the date of its dedication it had over a million books. Today, among its treasures are many first editions and important historic documents. There are two docent-led daily tours around the library; the entrance is free.
Image by Razimantv on Wikimedia under Creative Commons License.
Sight description based on wikipedia