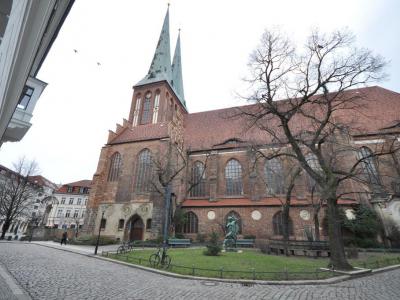 Berlin's oldest church-turned museum, Nikolaikirche (St. Nicholas' Church) has been a downtown landmark for over 800 years. Completed in 1230, this late-Gothic building is found in the city's oldest district, Nikolaiviertel (St. Nicholas' Quarter), just south of the Red Town Hall, and is recognizable by two impressive spires and stonework revealing a distinctive medieval past.

Today officially known as Museum Nikolaikirche, historically this has been more than just a religious site and a burial place for distinguished Berlin families, but also the seat of the city council and a heritage location. The first assembly of the city council was sworn into office here in 1809. From 1939, Nikolaikirche was no longer used as a church, and in 1987 was converted to a museum. Shortly after German reunification, in 1991 the first freely-elected Berlin-wide city parliament convened here. Following a comprehensive renovation, the building once again reopened to the public in 2010.

Today it holds a permanent exhibition, called “From the Base of the City to the Double Spire”, offering visitors insights into the history of the building and the surrounding area. It also plays host to various events, including concerts of organ music, fit to tempt anyone to return again and again. There is also a special program for children and youth.
Image by Jorge Láscar on Flickr under Creative Commons License.