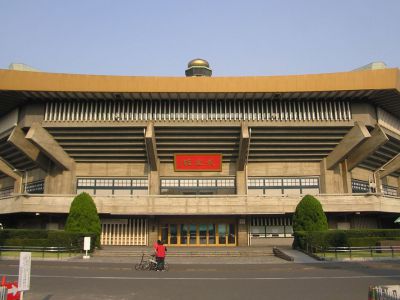 The Nippon Budokan (Martial Arts Hall) is a large indoor arena erected to host the Judo event in the 1964 Tokyo Olympics. It was modeled after the Yumedono Hall of the Horyuji temple in the Nara Prefecture of Japan.

The Nippon Budokan means Martial Arts Hall. It was built in 1964 and designed by architect, Mamoru Yamada. It has an octagonal roof and stands on the location of the former Kitanomaru Palace. It has three halls. The largest hall has a seating capacity for an audience of 14,000. There are 2,762 seats in the first floor, over 3000 seats in the second floor, more than 7000 seats in the third floor and standing space for 480 spectators.

The Nippon Budokan has also hosted many international rock concerts. The Beatles were the first group to perform here in 1966. Later well known singers like Bob Dylan and Eric Clapton have performed at the venue. The building is still used predominantly for wrestling and martial arts. The national championships of traditional martial arts like Judo, Kenda, Karate, Akido and Kyudo are held here annually. It is also used by the Pro Wrestling organization NOAH that conducts major events and competitions. Martial Arts classes are also held to train future champions at the Nippon Budokan.
Image by Morio on Wikimedia under Creative Commons License.
Sight description based on wikipedia