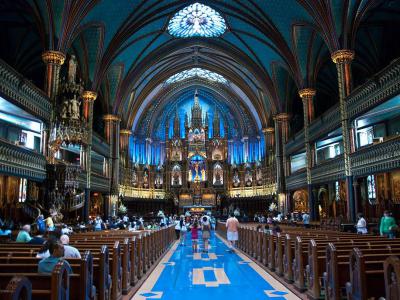 A stunning example of Gothic Revival architecture, the Notre-Dame Basilica is renowned for its lavish, colorful and dramatic interior. Filled with hundreds of intricate wooden carvings and several religious statues, it was declared a National Historic Site of Canada in 1989. The $10 admission fee doesn't turn away tourists who line up to be admitted, using the very informative brochure as a self-guide (additionally, a 20-minute English/French tour is free with entry).

You get a feel for the basilica's grandness right as you approach its bell towers rising high and its three statues looking out over the metropolis: the Virgin Mary (representing Montréal), St. John the Baptist (representing Québec), and St. Joseph (representing Canada). Inside, the vaults are colored deep blue and decorated with golden stars, while the rest of the sanctuary is decorated in blues, azures, reds, purples, silver, and gold. Unusual for a church, too, the stained glass windows along the walls do not depict biblical scenes, but rather the religious and social life of the early Ville-Marie settlement, showing the city's strong ties to the Catholic religion. Another spectacular highlight is the Casavant Frères pipe organ, dated 1891, which comprises four keyboards and 7000 individual pipes.

Notre-Dame Basilica has witnessed several grand weddings (including Céline Dion's) and funerals of eminent personalities. If you're interested in classical and religious music, the building plays host to concerts throughout the year.

Tip:
The 'AURA' light show (presented usually at 7 and 9pm) is exceptional but sometimes full so plan your visit: you can book your ticket online or come early before the show timing. Try sitting somewhere in the middle – between 50-70% from the front, and more towards the middle to get the best music & light experience.