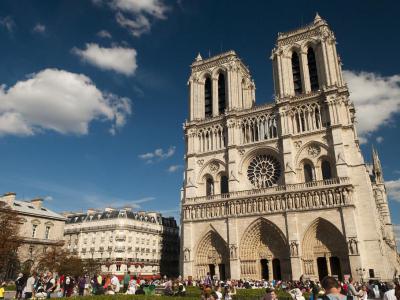 While the Eiffel Tower is an instantly recognizable symbol of France, the Notre-Dame Cathedral is a definitive symbol of Paris. At the time of its construction, it was the most ambitious French cathedral project ever attempted and, with its vaults rising above 33 meters, it held a national height record for several decades. The intrinsic beauty and architectural complexity of the cathedral has long made it an undisputed top landmark of Paris and an absolute must-see for visitors.

Largely completed in the 13th century, its construction took overall around 160 years, and thus can be attributed to an early-Gothic period. Following later attempts to modernize it in the 13th century, the final major round of work on the building came in the 19th century to repair the damage caused by brutal vandalism of the French Revolution. Nearly all of the cathedral's decorative elements seen today date back to that period.

Apart from the architectural side, another reason the Notre-Dame is so famous is “The Hunchback of Notre-Dame” novel by Victor Hugo written in 1831. In the course of history, the cathedral has witnessed many glorious and tragic events. In the midst of the Second World War, upon the Fall of France, there were fears that the German invaders might destroy the freshly renovated stained glass of the Notre-Dame, called the Rose Window. To prevent that, a lion's portion of the glass was hidden and re-installed only after the war was over. Created in the 13th century, this world's biggest glass window recently has made headlines again after successfully surviving the devastating fire in April 2019, along with some other artifacts and relics which are now temporarily removed for safety reasons.

Regrettably, that fire completely destroyed certain parts of the building, like the roof and the historic spire. To rebuild the iconic monument, a major fundraising campaign has been launched managing to generate over $1bln. Hopes are high that after the 5 years projected for complete restoration, the Notre-Dame cathedral will reopen its doors once again in its renewed splendor.
Image by Anna & Michal on Flickr under Creative Commons License.