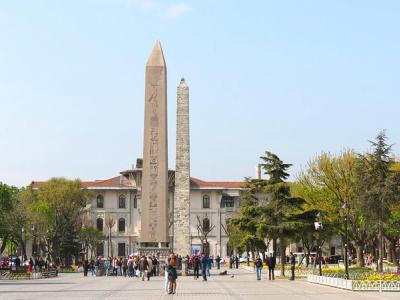 Commissioned by Pharaoh Thutmose III in the 15th century BC, the Egyptian Obelisk has four faces with a single central column of inscription, celebrating the Pharaoh's victory over the Mitanni which took place on the banks of the Euphrates in about 1450 BC. With the ascent of the Hittite Empire, Mitanni and Egypt eventually struck an alliance to protect their mutual interests from the threat of Hittite domination.

What you see is only the top third of the original obelisk built for the great temple of Karnak in Egypt, which the Romans had cut into pieces and shipped up the river Nile to Alexandria in 390 AD. This top section has survived nearly 3,500 years in astonishingly good condition., and it stands today where Emperor Theodosius placed it, on a marble pedestal, to commemorate his 20th anniversary on the throne of Constantinople. The reliefs on the pedestal show Theodosius as he offers a laurel wreath to the victor from the Kathisma (Imperial box) at the Hippodrome.

If you're around the area, give this monument a look. Its towering figure inside a peaceful park is rather exciting, especially for history buffs.
Image Courtesy of Flickr and Erik Cleves Kristensen.