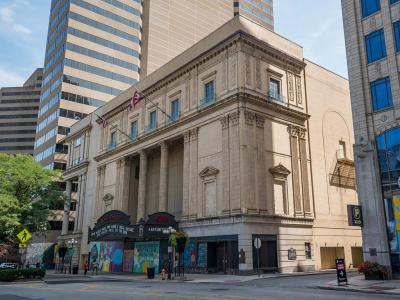 The Ohio Theatre is a highly ornate movie palace that is known as the "Official Theatre of the State of Ohio." Built in 1928, the theatre was designed by Thomas W. Lamb in a Spanish Baroque architectural style for the Loew's Theatre chain. The first motion picture shown at the Ohio Theatre was "The Divine Woman" on March 17, 1928.

The theatre fell out of use as television became more popular. In 1969, the theatre played its last movie and was scheduled to be demolished. Luckily, the Columbus Association for the Performing Arts was able to raise enough money to save the building. Soon after, it was listed as a National Historic Landmark.

Today, visitors can enjoy the opulence of the building as they stroll by on foot or they can attend a live show. Festivals, symphonies, concertos, operas and traveling Broadway performances are all regularly enjoyed at the Ohio Theatre.

The Ohio Theatre is conveniently located in downtown Columbus. Those on walking tours can explore the theatre while visiting the Ohio Statehouse, as it is located directly across State Street from the Statehouse's south entrance.
Image Courtesy of Wikimedia and Ɱ.