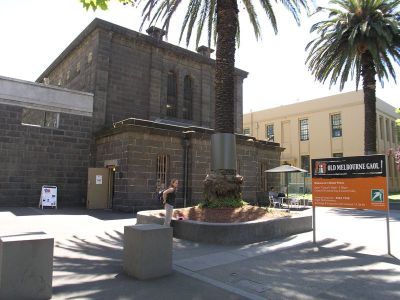 The Old Melbourne Gaol is a museum and former prison located in Russell Street, Melbourne. It consists of a bluestone building and courtyard, and is located next to the old City Police Watch House and City Courts buildings. It was first constructed starting in 1839, and during its operation as a prison between 1842 and 1929, it held and executed some of Australia's most notorious criminals, including notorious bushranger Ned Kelly and serial killer Frederick Bailey Deeming. In total, 133 people were executed by hanging. Though it was used briefly during World War II, it formally ceased operating as a prison in 1924; with parts of the gaol being incorporated into the RMIT University, and the rest becoming a museum.

The three-story museum displays information and memorabilia of the prisoners and staff, including death masks of the executed criminals. At one time the museum displayed Ned Kelly's skull, before it was stolen in 1978; as well as the pencil used by wrongly convicted Colin Campbell Ross to protest his innocence in writing, before being executed. Paranormal enthusiasts claim the museum is haunted, with claims of ghostly apparitions and unexplained voices near cells.

Hours: Monday-Sunday: 9:30 am – 5:00 pm
Image Courtesy of Wikimedia and Charlie Brewer.
Sight description based on Wikipedia.