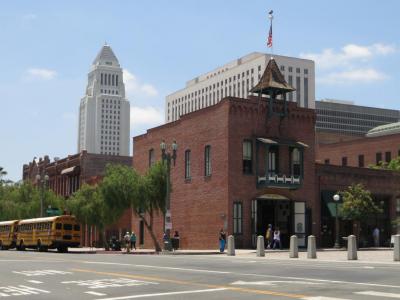 The Old Plaza Firehouse is the oldest fire station in the city of Los Angeles, built in 1884. It is located near Olvera Street in the Los Angeles Plaza Historic District. It was placed as a California Historical Landmark No. 730 on April 8, 1960.

Designed by local architect William A. Boring (the City paid him $160.75 for his drawings), and built in 1884, it operated as a firehouse until 1897. The building was thereafter used as a saloon, cigar store, poolroom, "seedy hotel", Chinese market, "flop house", and drugstore. The building was restored in the 1950s and opened as a firefighting museum in 1960.

The Plaza Firehouse Museum is open to the public Tuesdays through Sundays from 10 am to 3 pm. The museum features helmets, photos, and firefighting equipment of the late 19th and early 20th centuries. The museum is small and charges no admission fee. Even for casual uninformed visitors, the museum makes for a interesting journey through the evolution of firefighting.
Image Courtesy of Flickr and Ken Lund.
Sight description based on Wikipedia.