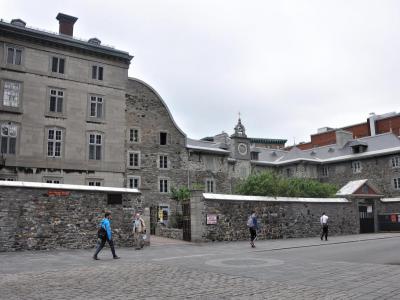 Montréal's second-oldest structure, the Sulpician Seminary located next to Notre-Dame Basilica was declared a National Historic Site of Canada in 1980, taking into consideration the quality of the architecture, which is a rare and remarkable example of 17th-century classical design built during the French Regime, but also the remarkable integrity of its convent garden, which once served as a means of subsistence, besides its use for meditation and leisure.

Since the 1680s, the seminary has served as the residence and administrative centre of the Messieurs of Saint-Sulpice who were the seigneurs of the Island of Montréal until the end of the seigneurial regime. The main building, which is the oldest part, is also the one that has been the least changed over the centuries. Its façade, of rough-cut limestone masonry, has a remarkable neoclassical-style entrance gate, built in 1740, through which you can peek at the clock – one of the oldest of its kind in North America. A real window on Montréal's past, and the oldest Seminary where priests still live today!
Image by Robert Cutts on Flickr under Creative Commons License.