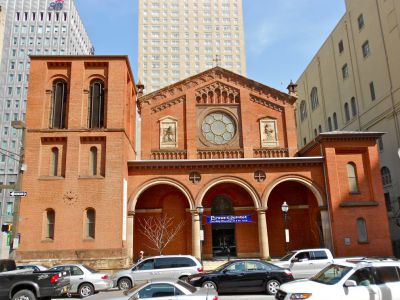 The present church was designed by renowned architect Richard Upjohn, with an eclectic juxtaposition of 12th-century Italian elements on the exterior and Romanesque elements on the interior. The exterior facade features two bas-reliefs, executed by the Italian sculptor Antonio Capellano that were originally part of the façade of the previous church. Other elements from the 1817 structure include the walls of the Federal period building, a stained glass window of the risen Christ over the entrance, a marble baptismal font designed by Maximillian Godefroy, and the Bishop’s chair given to St. Paul’s in 1815.
Image by Smallbones on Wikimedia under Creative Commons License.
Sight description based on wikipedia