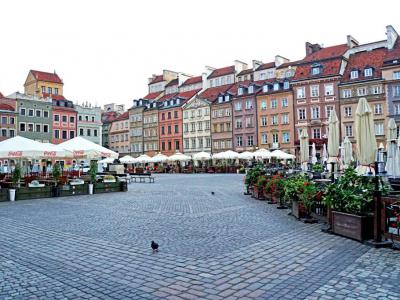 In the very center of Old Town Warsaw, you'll find the Old Town Market Place. Since the city was founded in the 13th century, merchants would meet here to sell their goods. The square has been the center of Warsaw life since, with everything from festivals to executions occurring here.

The townhouses built around the Old Town Market Place were Gothic until a fire destroyed them in 1607. Renaissance-style buildings replaced them, only to be replaced by the current late-Baroque style that you see today. There was a large town hall building here, but the German Luftwaffe destroyed it and the rest of the square during World War II.

The square was rebuilt in the 1950s, and efforts were taken to mimic its appearance from the 17th century. Each side of the square is named to an 18th-century parliamentarian. Dekert's Side on the north is named for Jan Dekert, a merchant and political activist. Barss' Side contains the Adam Mickiewicz Museum, honoring its namesake's poetry. Kollataj's Side honors Hugo Stumberg Kołłataj’s, a constitutional reformer and educationalist, while Zakrzewski's Side is named for mayor of Warsaw, nobleman, and art collector Ignacy Wyssogota Zakrzewski.

Several of the buildings on the square house the Warsaw Museum. Here, you can see collections of historical artifacts from the city that depict daily life. Their collection includes more than 300,000 objects spread over 21 themed rooms. The main entrance is in house No. 42 on Dekert's Side.

In the square, you will also see a statue of Syrenka, the "little mermaid" of Warsaw. She has appeared on the city's official coat of arms since at least the 14th century. The statue has stood here since 1855.
Image Courtesy of Flickr and Dennis Jarvis.