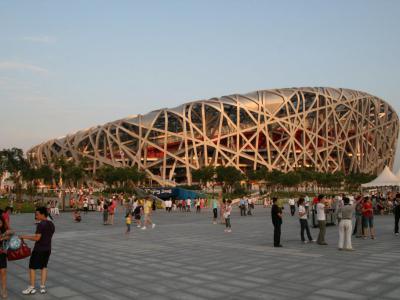 The Olympic Green is an Olympic Park constructed for the 2008 Summer Olympics. Since then, the streets around the park have been used for an exhibition street race of the FIA GT1 World Championship in 2011, after a race at Goldenport Park Circuit in the vicinity. It will again serve as an Olympic Park when Beijing hosts the 2022 Winter Olympics.

Beijing National Stadium is very popular for its unique architecture. Referred to as the “Bird’s Nest”, this stadium constructed in an elliptical shape and with a seating capacity of 91,000 was one of the top venues for the 2008 Beijing Olympics.

This stadium is built with 36 kilometers of steel beams resembling twigs in a bird’s nest. To let in light, spaces between the beams are covered with clear plastic sheets. To the left of the building, you will find the shadow of the building that clearly depicts these spaces. Olympic Green landscaping resembles angles of a Bird’s Nest.

Bird’s Nest is meant to be a cornerstone of the city landscape from its inception. It is located on the city's main north-south axis, which also includes the Forbidden City, Tiananmen Square and the Temple of Heaven.

Today Bird’s Nest remains a popular tourist attraction in more than a decade after the Beijing Olympics.

Tip:
You can purchase tickets to enter the building itself and you will be free to wander around as much as you like. The highlight is the walk on the roof – not something you usually get to do at stadiums. The view from the roof is spectacular on a good day and all the Olympic Park facilities can be easily seen.