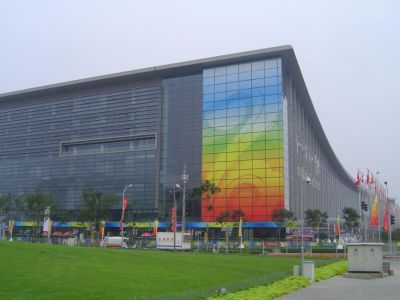 Spread over a massive 1,135 hectares, the Olympic Green is divided into a central area and a forest park. One of the prominent buildings at this venue is the Olympic Green Convention Center. Along with 13 other centers here, the convention center played a major role during the 2008 Beijing Olympic Games.

The three concepts of technology-empowered, culture-enriched and environmental friendly Olympics is reflected in the Olympic Green’s construction, design, location and post game usage. This venue was open to public after the Olympic Games and is being developed as an active center for sports competitions, entertainment programs, cultural programs, displays, conferences and shopping.

Olympic Green Convention Center was host to events such as shooting, fencing and modern pentathlon fencing disciplines during the Olympics. Covering an area of 270,000 square meters, this center is used as the Main Press Center and International Broadcast Center during exhibitions and conventions.

Tourists from all over the world flock to Olympic Green and tour the impressive buildings here. On your trip to Beijing, pay a visit to this venue that saw feverish, frenzied activity during the prestigious 2008 Olympic event. While there, do not miss out the well equipped, state-of-art Olympic Green Convention Center also known as the National Convention Center.
Image Courtesy of Wikimedia and Doma-w.