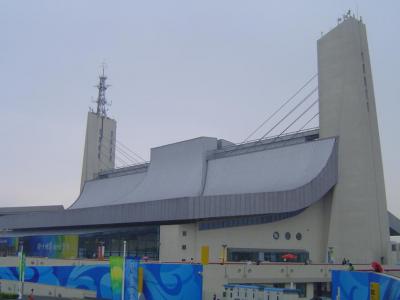 Olympic Sports Center Gymnasium is a part of the stadium where the Modern Pentathlon and equestrian events during the 2008 Beijing Olympic Games were held. This stadium is huge with a total area of 34,975 sq meters and a seating capacity of 40,000. This stadium was renovated for the Olympics.

The Olympic Sports Center Stadium looks grand today after its 17 month renovation using some of the top design and construction firms in Beijing, prior to the 2008 Olympics. Here you will find bronze statues of running athletes. The gym is designed to cater to professional athletes and sportsmen.

This stadium came into existence in 1990 and has served as a venue for the 11th Beijing Asian Games. It features advanced facilities at par with the best stadiums around the world. After the recent renovation, the stadium looks grand and vibrant attracting a lot of tourists.

The Gymnasium at the stadium has heat preserving interiors including the doors and windows. It is covered with a material that preserves heat. Enter the hall and you will be struck by its elegance furnished with attractive light purple chairs.
Image by Doma-w on Wikimedia under Creative Commons License.