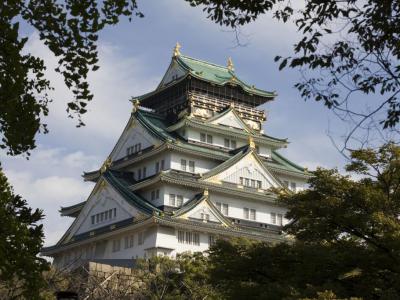 The Osaka Castle is one of the most famous landmarks in Japan. The castle functions as a museum and a popular tourist attraction.

Construction of the original castle began in 1583. It was modeled after the headquarters of feudal lord Oda Nobunaga, Azuchi Castle. Built by samurai Toyotomi Hideyoshi, the castle was designed to have a five-story tower with three additional underground stories. It was completed in 1597.

After his death, the castle passed to Hideyoshi's son, Toyotomi Hideyori. He ruled over the castle until it fell to the Tokugawa clan in 1620. The original building burned to the ground, and Hideyori committed seppuku, a form of ritual suicide.

Reconstruction of the castle included the main tower with five external and eight internal stories. The walls, built in 1620, are still standing, but the remainder of the castle burned when lightning struck the gunpowder warehouse. What remained fell into disrepair and was neglected through the early 19th century.

The castle was fully repaired in 1843 but only lasted 25 years, until it burned again. The Meiji government turned the remainder of the building into an army arsenal where guns and ammunition were manufactured.

Osaka Castle was one of the world's largest military armories during World War II when American bombs destroyed 90 percent of the military equipment.

The castle was restored between 1995 and 1997. It was rebuilt to resemble the original castle from the exterior as much as possible. It is surrounded by inner and outer moats with four water-filled sections that represent the cardinal directions.

The castle grounds contain 13 structures that are culturally significant to Japan. Among these are, the Ote-mon Gate, the Rokuban-yagura Turret, the Kinmeisui Well, Kinzo Storehouse, and the Enshogura Gunpowder Magazine.
Image Courtesy of Flickr and Chris Gladis.

Apart from being an urban public venue, the area is also a historical site, dating back more than half a millennium. Back in 1496, during the...  view more