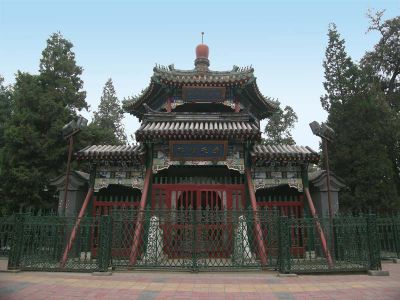 Ox Street Mosque is a spiritual center that caters to more than 200,000 Muslims in Beijing. This is the oldest and largest mosque in the city in existence since it was built in 995. Ox Street Mosque was constructed by two Arabs and underwent many renovations, additions and alterations between 13th and 19th centuries during the Yuan, Ming, and Qing and dynasties. It has been restored periodically since 1949.

A mile to the west of Temple of Heaven, you will find the Muslim Quarter. Ox Street or Niu Jie is located in this quarter. As you enter the street, you will find a variety of vendors and stalls selling shaobang or muffins, rice cakes and fried dough rings.

Ox Street Mosque is spread over a large area of 6000 square meters. The complex has many buildings such as the prayer hall, an observatory tower, the Bangge Lou minaret and two stone stele pavilions.

The mosque resembles a Buddhist temple due the classic Chinese style exteriors. However, as you enter the temple, there is no mistaking the traditional Arab style and ambience. The walls of the building are adorned with Arabic and Chinese inscriptions. If you are a non-Muslim, you can enjoy looking around the courtyards and exterior architecture. Only muslins are allowed to enter the main prayer hall.
Image by Smartneddy on Wikimedia under Creative Commons License.