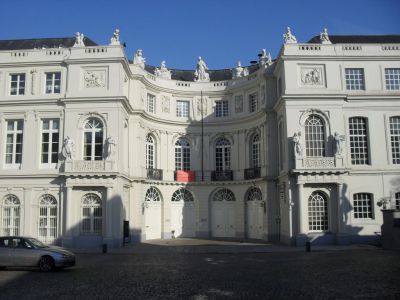 Palace of Charles of Lorraine, Brussels

This palace was named for Prince Charles Alexander of Lorraine, the governor-general of the Austrian Netherlands from 1744 to 1780. He served as one of the principal commanders in the Austrian military during the War of the Austrian Succession. The building started out as an old townhouse for the Counts of Nassau but was transformed into a neoclassical palace. Notable features of the building include a rotunda with a central rosette made from 28 different types of Belgian marble. The marble came from the Prince’s personal collection of minerals. The Prince was very interested in science and his personal collection of mineral pieces numbered over 5,000.

The palace has five halls, each decorated in stucco and silk. Each hall reflects a particular aspect of Charles de Lorraine’s life, including science, leisure, traveling, freemasonry and music. It is in these halls that guests were entertained and state affairs were handled. Today it serves as a museum for 18th-century items demonstrating the aristocratic and intellectual life at the time, including sedans, china, silverware, clocks, scientific instruments, and medals. The exhibited works are from the collections of the Royal Museum of Art and History and the Royal Library.

Why You Should Visit:
Architecturally attractive, in spite of being almost hidden from view (and tourists).

Opening Hours:
10am-5pm – only on every 1st Saturday of the month; free admission
Image by Q. Keysers on Wikimedia under Creative Commons License.
Sight description based on wikipedia