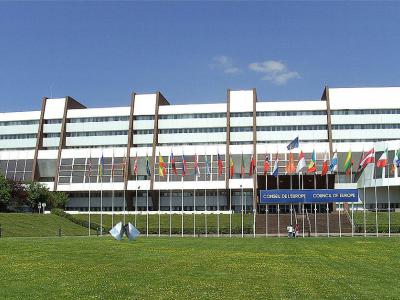 If you have visited several of Strasbourg’s magnificent ancient buildings before heading for the Palace of Europe, don’t get a fixed idea that it will look like something out of a German fairy tale or you’ll be rather shocked but its startling and somewhat aggressive modernity.

It looks more like a futuristic scientific building where strange experiments are carried out than a palace, but actually it has been the home of the Council of Europe since 1997.

After the Second World War the assemblies took place in one of the buildings in the University; in 1950 the Council moved to the House of Europe, which was pulled down in 1977 and became the lawns of the new building.

The palace is square and rather like a fortress, with its sloping walls of glass, sandstone and steel. In the central courtyard are two domed buildings, the larger one being the Assembly Chamber, the smaller one is the Debating Chamber.

The palace is 38 meters high and has a floor space of 64000 square meters, with 17 meeting rooms and 1000 offices for the Council’s secretariat. It also houses the office of the Secretary General of the Council of Europe.

Strasbourg is a very popular tourist destination because it offers you many wonderful sights. The city has the reputation of being one of the most beautiful cities of France, so during your walking tour here don't miss out on the chance to see some of the most famous landmarks of Strasbourg, listed below.

Strasbourg's nightlife is very vibrant due to the city's student population. Usually hangout time starts at 11 p.m. and ends at 6 a.m. Many of the hotspots are clustered around the cathedral and along rue des Juifs. Be sure to visit the hottest venues listed below.

Strasbourg, the main city of the Alsace region in France, is modern and constantly developing. It is known the numerous European Institutions that it harbors and is famous all over Europe for its modern architecture. Here is a list of examples of Strasbourg's modern architecture that you should take into consideration in your walking tour.