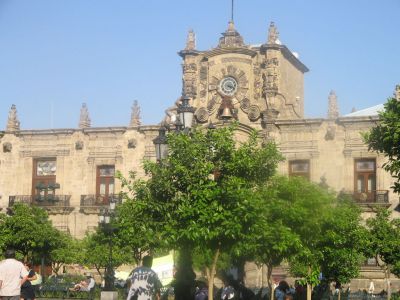 The original Government Palace was built in 1650. However, an earthquake in 1750 destroyed the original adobe building. Governor Don Jose de Basarte commissioned a new building that was designed by Manuel Jose Conique and Nicolas Enrique del Castillo.

The construction was funded by taxes placed on local tequila producers. Spain prohibited any local production of alcohol, so instead of legally producing alcohol and sending tax money to Spain, the local government secretly allowed alcohol production to continue while keeping the tax money for local improvements. The palace was officially inaugurated in 1790.

Government Palace has a magnificent baroque facade with attractive balconies and large windows. The palace features an impressive Doric gate and a large courtyard with colonial-style columns and arches.

The historic Decree for the Abolition of Slavery was signed at the palace in 1810. Every year, the palace commemorates this important event.

President of the Mexican Republic Benito Juarez narrowly escaped assassination in the palace on March 13, 1858.

In the main courtyard's stairwell, visitors can see three murals painted by the renowned Mexican caricaturist and painter Jose Clemente Orozco in 1937.
Image Courtesy of Wikimedia and Patrick.