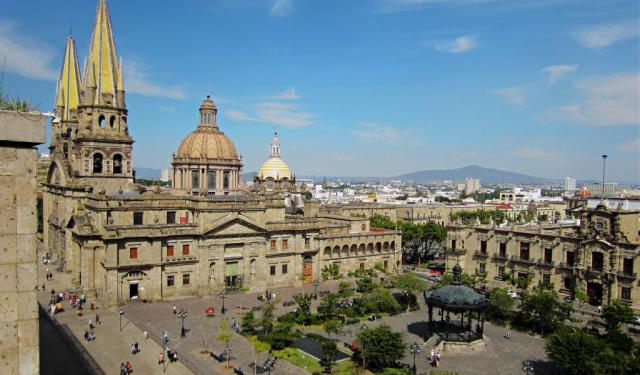 The historic center of Guadalajara is the oldest part of the city, a place where it was founded. The abundance of handsome colonial landmarks here – old buildings, public parks and squares (plazas) – makes the area truly magnificent. The plazas – popular gathering spots filled with fountains, statues, benches and food stalls – are particularly great for having a break, watching people and admiring majestic architecture.

The Downtown itself, centered on Paseo Morelos/Paseo Hospicio, extends from Plaza de Armas (Main Square), which is marked by an elegant monument and band stand Quiosco De Guadalajara, to Plaza de los Mariachis (Mariachi Square), at the far east end. The latter square is named so for the many mariachi musicians playing here regularly live traditional Mexican melodies.

Together with Plaza de Armas, another three plazas, namely Plaza de la Liberación, Plaza Guadalajara and Rotonda Plaza, surround Guadalajara Cathedral, which is one of the city's key symbols, in the form of a Latin Cross.

Plaza de la Liberación (Freedom Square) borders the Cathedral to the east and is nicknamed Plaza de las Dos Copas for the two fountains located on its sides. Facing this square Teatro Degollado (Degollado Theater) has directly behind it yet another plaza with a fountain, called the Fuente de los Fundadores (Fountain of the Founders). Plaza Fundadores (or Founders Square) covers the exact spot where the city of Guadalajara was established.

One more fountain – the Inmolación de Quetzalcóatl – is the centerpiece of the nearby Plaza Tapatia (Tapatia Square), which lies between the Cathedral and the Hospicio.

To explore more closely the beautiful churches, fountains and monuments dominating the plazas of Guadalajara's historic downtown, take this self-guided walking tour as a highly-recommended part of your visit.
Image Courtesy of Wikimedia and Another Believer.
How it works: Download the app "GPSmyCity: Walks in 1K+ Cities" from iTunes App Store or Google Play to your mobile phone or tablet. The app turns your mobile device into a personal tour guide and its built-in GPS navigation functions guide you from one tour stop to next. The app works offline, so no data plan is needed when traveling abroad.

Guadalajara Square is home to City Palace, and visitors can also enjoy views of Guadalajara Cathedral. The square was founded in the 1950s when the City Palace was built. The area had several buildings that were demolished to make room for the palace and plaza. In addition, an underground parking lot was built underneath the plaza.

The square is shaded by laurel trees and was originally called the Laurels Square (Plaza de los Laureles). In 1992, the square was renamed Guadalajara Square to celebrate the city's 450th anniversary.

Guadalajara Square features a large fountain that depicts an oyster shell decorated with rose petals and a single pearl. The fountain celebrates Gudalajara's two nicknames, "The Pearl of the West" and "City of Roses." The fountain also features the city's coat of arms.

The square has several welcoming cafes where visitors can enjoy a break. The original underground parking lot has been transformed into the Plaza Guadalajara Shopping Center.

Image Courtesy of Wikimedia and Ponchomx.
2

Plaza de Armas is the main square of Guadalajara. It is located directly in the city's historic center. The square offers a variety of sights, such as the Guadalajara Cathedral and the Government Palace.

Mariachi bands frequent the Main Square. Those who wish to stay for a while to take in the vibrant square can do so on one of the many public, wrought iron benches. The rows of trees provide ample shade so even the hottest days can be enjoyed. The square is also lovely at night when it is lit by the lampposts and the lights of Guadalajara Cathedral.

The square was constructed in the late 19th century and remodeled in 1910. The bandstand in the center of the square is an art nouveau, wrought iron bandstand that was gifted by Mexican president Porfirio Diaz. The stage features eight pillars with female figures that represent different musical instruments. It was built in Paris by the Val D'Osne Art Foundries (Fonderies D'art Du Val D'Osne).
Image Courtesy of Wikimedia and Leonardo Muñoz.
3

Freedom Square is dedicated to Miguel Hidalgo, who signed the Abolition of Slavery in 1810. The square features a bronze sculpture showing Miguel Hidalgo breaking the chains of slavery. Hidalgo also led the Mexican War of Independence and is known as the Father of the Nation.

Because of its large size, the square hosts many exhibitions and events. The square is also home to a Guadalajara sign, which is a popular backdrop for photos.

Freedom Square has a vibrant market where you can find clothing, pottery, ceramics, art, and souvenirs. The square also has several cafes with outdoor seating so you can grab a refreshment and enjoy people-watching.
Image Courtesy of Flickr and Wonderlane.
4

Founders Square is an urban square in the cultural center of Guadalajara. It is directly behind Degollado Theatre. It is often used to host citywide events such as the February 14 anniversary celebration. Guadalajara was founded on 14 February 1542 by Cristóbal de Oñate, a Basque conquistador, as the capital of the Kingdom of Nueva Galicia, part of the Viceroyalty of New Spain.

There are a number of public artworks in Founders Square. The Frieze of the Founders of Guadalajara (Friso de los Fundadores de Guadalajara) is a sculptural fountain of the founders of Guadalajara. The bronze sculpture depicts Cristobal de Onate, Beatriz Hernandez and 13 families from Spain who colonized the Atemajac Valley.

The square also includes a statue of Francisco Tenamaztle and bronze sculptures of Hernandez and Miguel de Ibarra, the first mayor of the city. The buildings that surround the square include the Degollado Theatre and the tourism office of the city. The University Center of Art Architecture and Design, the Garden of San Agustin and the Temple of Saint Mary of Grace (Templo de Santa Maria de Gracia) are all nearby.
Image Courtesy of Wikimedia and Another Believer.
5

Tapatia Square is a bustling urban square near the center of Guadalajara. The large square is comprised of other smaller squares, the Central Esplanade and the Paseo del Hospicio. There are a number of places to shop and eat around the square. There is also ample room for resting while in the midst of exploring the city.

Four smaller sculptures surround the main sculpture. These represent the four cardinal points. This is adorned by a flower-shaped fountain whose purpose is to make the sculpture appear as if it is in flight.
Image Courtesy of Wikimedia and Adrián Cerón.
6

Mariachi Square is a square in Guadalajara that is known for hosting music. The square is frequented by mariachi bands each evening. Known as the birthplace of mariachi music, it is also the location of the annual International Mariachi Festival.

The square is mostly quiet during the daytime hours. A few single mariachi musicians busk on the street during the day or simply wait to pose for pictures with tourists. The music only starts to swell in the evening when the streets become lively and bustling with locals and tourists alike.

Mariachi Square has a number of low-cost souvenir shops, eateries and bars. There is also a large fountain near the front steps of the Parish of Saint John of God. This Catholic church looms over Mariachi Square next to the various shops, boutiques and tequila distilleries.

It is worthwhile to visit Mariachi Square to experience its full vibrance even if you are not a fan of mariachi music.
Image Courtesy of Wikimedia and Reporte Fénix.