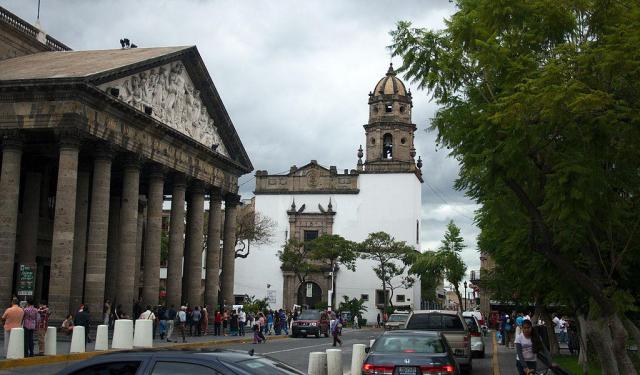 Guadalajara is home to a great number of wonderful religious buildings, dating back to colonial era. Many of them are unique architectural treasures of the city and are impressive for their beautiful façades, niches, figures, elegant arches, and striking interiors. Follow this self-guided walking tour to visit the most important historical religious buildings in Guadalajara.
Image Courtesy of Wikimedia and José Eugenio Gómez Rodríguez.
How it works: Download the app "GPSmyCity: Walks in 1K+ Cities" from iTunes App Store or Google Play to your mobile phone or tablet. The app turns your mobile device into a personal tour guide and its built-in GPS navigation functions guide you from one tour stop to next. The app works offline, so no data plan is needed when traveling abroad.

The Templo Expiatorio del Santísimo Sacramento, or Expiatory Church, is a Catholic church dedicated to the Blessed Sacrament. The church was designed by Italian architect Adamo Boari in the Neo-Gothic architectural style. Construction on the church began in 1897.

Construction on the Expiatory Church halted in 1910 due to the Mexican Revolution. Building did not start again until 1924. Three years later, architect Ignacio Diaz Morales took over the project and oversaw construction until it was completed almost 50 years later. The church was finally complete in 1972.

The church is primarily made of carved stone. The temple's doors are made of granadilla wood, carved by Jesús Gómez Velazco, and they are incrusted with bronze high reliefs made by master Benito Castañeda. The three tympana on the church's facade are embellished with Italian mosaics created in the Vatican's Mosaic Factory. The central one represents the Lamb of God; the east, Saint Tarcisius; and the west, St. Pius X. The church clock, imported from Germany, has a 25-bell carillon.

Tourists are welcome to visit the church for free from 7 AM to 11 PM seven days per week.

Image Courtesy of Wikimedia and Luisalvaz.
2

Templo de Nuestra Señora del Pilar is an old church completed in 1720. Its impressive façade features two windows, a portal, and three niches, which depict sculptures of the Virgin of Pilar in the center and Saint Joaquin and Saint Anne on both sides. The church was reconstructed in 1882 and houses beautiful vaulted ceilings. Inside you will see sculpture niches and neoclassical altars that were created by Quarry Carrara in Italy. You will also appreciate the wonderful oil paintings and murals.
Image Courtesy of Flickr and Enrique López-Tamayo Biosca.
3

Templo de Jesus Maria can be found on Morelos Street and is a beautiful grey and yellow religious building. The church was constructed in stone during the XVIIIth century and features neoclassical elements. The Templo de Jesus Maria is one of the finest examples of colonial architecture in Guadalajara and is a prominent holy place in the city.
Image Courtesy of Wikimedia and Sergio Aguilar Meza.
4

Templo de San Felipe Neri is another historical religious building located on San Felipe Street, which is considered one the most beautiful religious buildings in the city. The construction of the church began in 1752 and was completed in 1802. Its impressive façade houses beautiful ornaments, Baroque arches, niches with figures of saints, and one of the most beautiful towers in the city. Inside you will find 14 paintings, created by the talented Mexican painter of the seventeenth century Miguel Cabrera.
Image Courtesy of Flickr and José Gómez.
5

Templo de la Merced is situated near the Palacio Municipal, on Hidalgo Avenue, in the center of the city. Originally founded in 1629, the construction of the present church began in 1650 and was completed in 1721. This religious building has a Baroque façade and a fine door arch. Inside you will find several niches; the central one depicts Our Lady of Mercedes. The main altar located in the center is home to sculptures of Madonna and child. You will also see copies of paintings from the seventeenth and eighteenth century created by artist Diego Auditors.
Image Courtesy of Flickr and Enrique López-Tamayo Biosca.
6

Guadalajara's first cathedral was built in 1541. This cathedral was damaged in a fire, and Phillip II, King of Spain, commissioned a new cathedral. Construction began in 1561 and was completed in 1618. The Spanish Renaissance-style Guadalajara Cathedral was consecrated in 1716.

Guadalajara Cathedral has eleven altars gifted by King Fernando VII of Spain. The altars are dedicated to Our Lady of Guadalupe, Our Lady of the Assumption, Our Lady of Zapopan, and Our Lady of Sorrows. In addition, there are also altars dedicated to Saint Thomas Aquinas, Saint Nicholas, Saint Dominic, Saint Christopher, and Saint John of God.

In the Martyrs Relic, you can see the bones of 23 men that died during the Cristero Wars. The Cristero War, also known as the Cristero Rebellion, was a widespread struggle in central and western Mexico against the implementation of secularist and anticlerical articles of the 1917 Constitution. Pope John Paul II beatified these remains in 1992.

Spanish artist Bartolome Murillo painted the beautiful The Assumption of the Virgin in 1650. Emperor Carlos V donated the Virgin of the Roses sculpture.

The 19th-century organ was imported from France and took an entire year to assemble. The beautiful stained glass windows also came from France.

The cathedral has hidden tunnels that were used as escape routes and hiding places.
Image Courtesy of Wikimedia and Luisalvaz.
7

The Augustinian order had wanted its own church for many years, but rival Franciscans rejected the idea. Fray Antonio de Mendoza was put in charge of the new church, and his sister donated funds to build the church. San Agustín Church was built between 1573 and 1674 and features a distinctive gold and white facade.

Augustin convents were usually built facing west. However, the San Agustin Church was built facing north to face the city's main square at that time. The old square disappeared when the Degollado Theater was built in 1866.

The interior is simple and features an altar depicting Saint Augustine and his mother, Saint Monica.

In 1818, a large earthquake destroyed the church, which was rebuilt in 1854. The adjacent former convent now houses the School of Music of the University of Guadalajara.
Image Courtesy of Flickr and Enrique Lopez Tamayo Biosca.
8

Templo San Francisco de Asis or San Francisco Church was founded in 1530 by Fray Antonio de Segovia and can be found at 345 Corona Street. This medieval church used to be a convent with the entrance on the south side. After remarkable transformations during the years it became a parish church with a splendid garden, where monks grew vegetables and fruits before. The present San Francisco Church houses three naves covered by fine paneled arches and rectangular tower. Inside you will appreciate the large gilded altarpieces and paintings.
Image Courtesy of Wikimedia and José Guadalupe Pérez González.