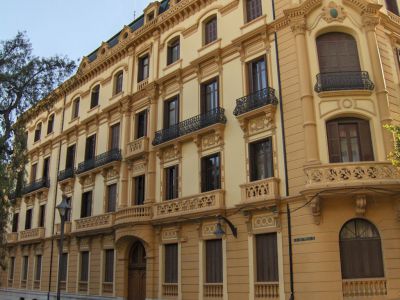 The old Palacio de la Tinta (Ink Palace) is a French-influenced edifice, located on Paseo de Reding, next to the Edificio de viviendas "Desfile del Amor" residential building, which is in the La Malagueta neighborhood of the Centro district.

The 10.500m² palace was constructed in 1908 in the Parisian style - fin de siècle, and was designed by architect Julio O'Brien, who also equipped it with three courtyards, stables and elevator floors.

The building stands on a plinth of stone and has three facades: the main one overlooking Paseo de Reding in front of the Félix Sáenz houses. The architect used classical elements, such as the Corinthian columns, the standing out stipes or struts, to create a historicism close to modernism, which is very unique in Malaga. The heritage value of this property is also enriched by other elements, such as the steeply sloping slate roof or the French-influenced dormers.

Originally, the building housed the headquarters of the Andalusian Railway Company, but now is the seat of the Andalusian Water Agency. The property owes its name to the former tenant, under whose occupancy the large quantities of ink had to be moved around the building daily in order to issue railway tickets by hand.
Image by Té y kriptonita on Wikimedia under Creative Commons License.