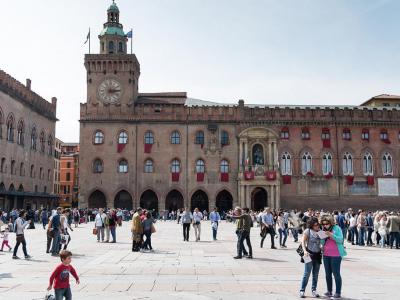 Palazzo d'Accursio (or Palazzo Comunale) is a palace in Bologna. It is located on the Piazza Maggiore and had been the city's Town Hall until 11 November 2008. Palazzo d'Accursio is home to the Civic Art Collection, with paintings from the Middle Ages to the 19th century. It also houses the Museo Morandi, with the works by Giorgio Morandi donated to the comune by his family. In 1336 it became the seat of the Anziani ("Elder"), the highest magistrates of the commune, and then seat of the government. In the 15th century it was restored by Fioravante Fioravanti, who added, among the other feature, the Clock Tower (Torre d'Accursio).

The façade features a portcullis and a Madonna with Child, a terracotta by Niccolò dell'Arca in the upper section. Over the portal is a large bronze statue of the Bolognese Pope Gregory XIII (1580). A bronze statue of Pope Boniface VIII is now in Medieval Museum. The Hall of the Communal Council, on the first floor, is where the Bolognese Senators met, and contains a frescoed gallery ceiling by Angelo Michele Colonna and Gioacchino Pizzoli (1675–1677). The Farnese Hall, on the second floor, was rebuilt in 1665 by Cardinal Girolamo Farnese. It has fresco decoration by pupils of Francesco Albani.
Image Courtesy of Wikimedia and risastla.
Sight description based on Wikipedia.