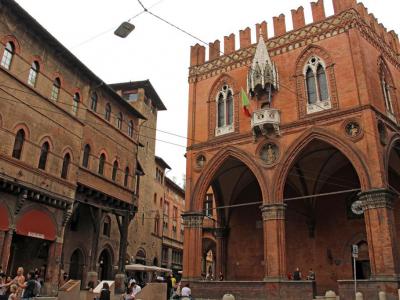 The Palazzo della Mercanzia was built in 1382. It was designed by architects Lorenzo da Bagnomarino and Antonio di Vincenzo in the Gothic architectural style. The decorative, hanging arches and sculptures were added by a variety of designers who exemplified different schools of design. Tourists will see sculptures, hanging arches, pillars and spiral columns.

Those who enter the palace will see paintings of the presidents of the Chamber of Commerce on the second floor. They will also find a library, which is open to the public. They will find Renaissance-style frescoes, walls adorned with silk fabric, a Murano chandelier and a small courtyard.

A unique feature of the Palazzo della Mercanzia is the Bolognese recipes it preserved in its library. The original recipes of some of the classic regional cuisine such as Bolognese sauce and Bolognese green lasagna can be traced to the records stored in this building.
Image Courtesy of Flickr and Fred Romero.