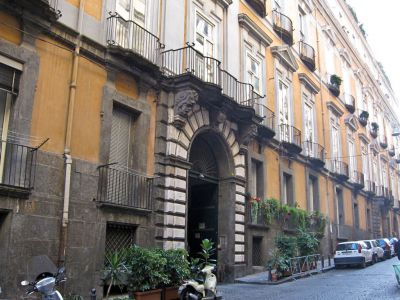 The Serra di Cassano Palace is a large mansion in Naples that belonged to the aristocratic Serra family. Today it houses the Italian Institute for Philosophical Studies.

The Serra di Cassano Palace was designed by architect, Ferdinando Sanfelice in the first half of the 18th century for the Duke of Cassano. The Dukes of Cassano were from the Serra family, one of the 54 aristocratic families of Genoa. Their wealth came from banking, insurance and law. Initially, the palace had two entrances, one of which faced the Royal Palace. This entrance was closed in 1799 by the Duke of Cassano, Luigi Francesco Serra, to protest the execution of his son, Gennaro Serra. Gennaro was involved in revolutionary activities against the Bourbons and was beheaded at the Piazza del Plebiscito, in full view of the palace.

The Serra di Cassano Palace has a simple double stairway made of grey volcanic stone flanked by a white marble balustrade. The interiors have many beautiful frescoes and most of the original furniture is preserved. The mansion once housed one of the finest libraries in Naples. The contents of the library were sold to Viscount Spencer in the 19th century and a portion is now in Althorp, the country home of the family of the late Diana, Princess of Wales.
Image Courtesy of Flickr and Armando Mancini.