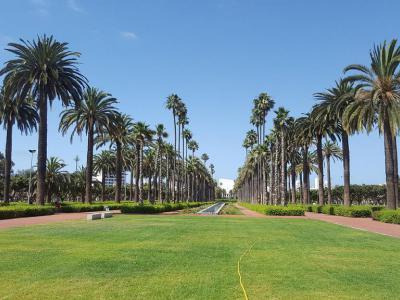 Arab League Park is near the city center, west of Hassan II Boulevard, east of Roudani Boulevard and just south of the Church of the Sacred Heart of Jesus (Casablanca Cathedral). The park is the largest park in town, covering 30 acres of land. In 1913, French architect Albert Laprade was commissioned to redesign the central city park.

The park was redone under the general supervision of Henri Prost. The name selected for the park was Lyautey Park, in honor of the Resident General of Morocco. Some arches from the old Portuguese prison, the Prison of Anfa, were moved by order of Lyautey to the park to provide support for a pergola.

The park is a huge green oasis in the middle of a bustling city. Palm trees run north and south the length of the park. It has recently emerged from an extensive reconstruction that has lasted almost two years. It has a large pond featuring water lilies and many exotic plants.

By the intersection of Moulay Youssef Avenue and Hassan II Avenue by the Arab League Square are more than a few cafes with terraces where one can rest after exploring the Park.
Image Courtesy of Wikimedia and Reda benkhadra.