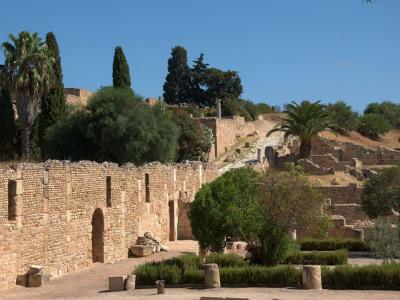 The Park of the Roman Villas sits on Odeon Hill, northeast of the Carthage archaeological site. The park is open to tourists who wish to see a well-preserved Roman villa, mosaics and the aviary.

The only villa that remains in good condition is the Villa of the Aviary. Significant restoration took place in the 1960s that focused on this villa. It has pink, marble columns, a square courtyard and a namesake mosaic of birds resting in foliage. It sits among a garden and an arboretum.

This villa has a terrace that opens onto the street. It also has an atrium, ceremonial apartments, a gallery and a foyer. There were also private apartments, baths and shops.

Primarily built in the 2nd century, most of the villas in this area are in disrepair, which stands in stark contrast to the highly restored Villa of the Aviary. In addition to villas, the site is also home to an amphitheater that was excavated in 1999.
Image Courtesy of Wikimedia and Alexandre Moreau.