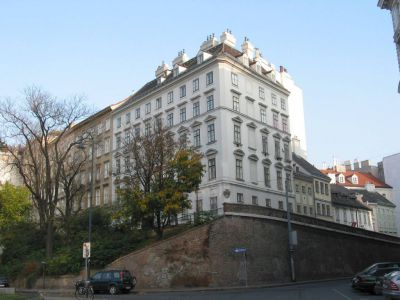 The Pasqualati House is no different in appearance from any of the other houses along the quiet street of Mölker Bastei (built on a former bastion of the city walls), but it is the most famous of more than 30 places where Ludwig van Beethoven resided during his 35 years in Vienna.

Named after its original owner, Baron von Pasqualati, it was twice Beethoven's home from 1804 to 1815 – the mid-life period. He composed many of his best-loved works here, including Symphonies Nos. 4, 5, 7 and 8, Piano Concerto No. 4, numerous string quartets, as well as the magnificent – and solitary – opera "Fidelio".

Today, the two rooms on the 4th floor, which the composer occupied (plus another two from a neighbouring apartment), have been converted into a small museum with various intriguing memorabilia on display, such as a lock of Beethoven's hair, his salt and pepper pots, a photo of his grave at the Jewish cemetery in Währing, a rather gruesome death bed engraving, and early editions of his scores. The museum also contains busts and paintings of the great composer, including a famous portrait by J.W. Mähler, and a fine painting of his patron Prince Razumovsky, the Russian ambassador to Vienna.

Tip:
Note particularly the prints showing what the window view out over the Mölker bastion was like when Beethoven lived here, and the current view too – a fantastic 4th-floor look out onto the famous Ringstrasse.

The Innere Stadt, first district of Vienna, is the historic center of the city and a World Heritage Site. Originally the inner city was divided into four quarters, which were designated after important town gates. Take this self guided tour to explore the historic landmarks, famous museums and specialty shops in the oldest part of Vienna.