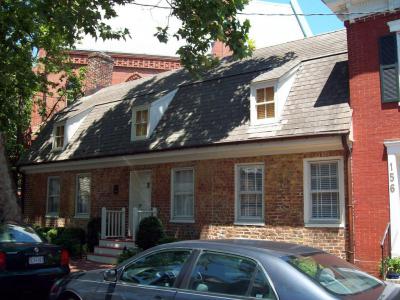 The Patrick Creagh House is a single-pile, one-and-a-half-story brick home with a steeply pitched gambrel roof.

This historic house was originally built between 1735 and 1747 by local craftsman Patrick Creagh, and enlarged during the late 18th or early 19th centuries. In the early 19th century, the property was purchased by free African-American, John Smith, whose wife operated Aunt Lucy's Bakeshop at the corner of Main and Greene Streets. Some walls of the house show scars from the gunfire during the Civil War. The backyard of the house has been used in a number of remodeling advertisements.

The Patrick Creagh House was listed on the National Register of Historic Places on January 29, 1973.
Image by Pubdog on Wikimedia under Creative Commons License.
Sight description based on wikipedia