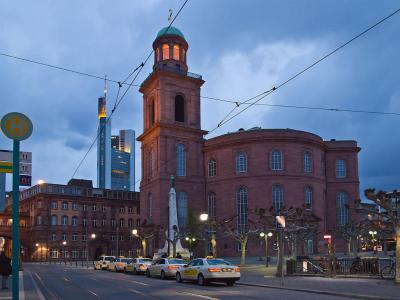 The elliptical-shaped St. Paul’s Lutheran Church is located near the Zeil shopping area of Frankfurt. The building is significant not only for its architecture but the role it played in shaping German democracy in 1848.

Paulskirsche was built as a protestant Evangelical Lutheran church in an oval neoclassical style with red sandstone exterior walls between 1789 and 1833. Meetings were held in the church because of its rounded shape. In 1848, elected representatives from Germany and Austria met in the hall to draft a Charter of Basic Rights and a Constitution to unify Germany on the basis of popular self-determination. The attempt subsequently failed and the structure was used for church services again. Paulskirsche suffered extensive damage during WWII bombings. After the war, its exteriors were painstakingly restored and the interiors were simplified and modernized. The building is now used for exhibitions and meetings. The hall on the first floor is used for municipal and city functions. The Peace Prize of the German Book Trade and the Goethe prize by the city of Frankfurt are awarded at this historic setting.

The striking feature of the building is a modern mural that encircles the interior wall showing the procession of the people’s representatives into Paulskrische that stands today as the symbol of German democracy.

Why You Should Visit:
Free entry, with a wealth of information in English covering the German democratic process.

Tip:
Pop in for the excellent art exhibition in the basement (pieces are for sale but are on the expensive side).
Upstairs you can visit the room in which JFK gave his brief speech in 1963.