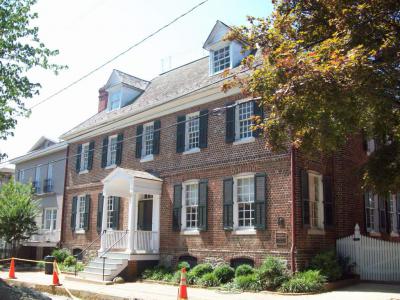 The Peggy Stewart House, also known as the Rutland-Jenifer-Stone House, is a 2-1/2 story Georgian style brick home built between 1761 and 1764 by Thomas Rutland as a rental property. At various times it was owned by Thomas Stone and Daniel of St. Thomas Jenifer. In October 1774, the house was owned by Anthony Stewart, owner of the ship Peggy Stewart. For its associations with the burning of Anthony Stewart's ship, much as for its architectural significance as a mid- to late 18th century Georgian mansion, in 1973 the property was listed in the National Register of Historic Places. Furthermore, the dwelling was recognized as a National Historic Landmark for its associations with Jenifer and Stone, and for the thematic representation of politics and diplomacy (1763-1783) during the American Revolution.

The house stands on an elevated basement. The original rectangular structure measures about 50 feet (15 m) wide and 30 feet (9.1 m) deep, or five bays by three. The side elevations feature single-bay projecting pavilions, crowned with pediments projecting from the hipped main roof. The present roof form was built in 1894 during a significant remodeling. The large brick wing to the rear was an addition that replaced a wooden structure during the 1894 remodelling, as was the addition of the roof-top balustrade.

The interior features a central hall plan. A living room or large parlor occupies the entire space to the left of the hall. A dining room and a parlor are on the right side of the hall. There are six bedrooms upstairs. The interior has been extensively altered, with original woodwork remaining only in one bedroom. The home is located near Gate 3 of the United States Naval Academy and remains a private residence.
Image by Pubdog on Wikimedia under Creative Commons License.
Sight description based on wikipedia