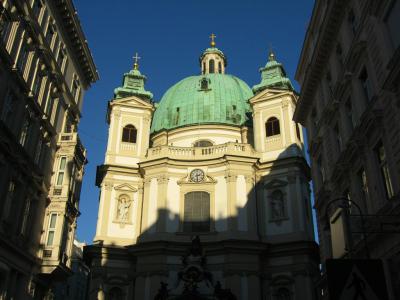 St. Peter’s Church sits atop one of the oldest known religious sites in Vienna. There has been a church on this spot since the early 4th century AD. A much larger version of today's church was reportedly built in 792, founded by none other than Charlemagne himself. Attesting to this is a plaque on the building's facade that tells of the legend of Charlemagne.

In more modern times, St. Peter’s Church takes up much less space, being crunched into what it occupies on St. Peter's Square. The overall architectural design is Baroque. In fact, this is one of the most decorated churches you will find anywhere, for any building designed in that style.

The outer color is white and a very light yellow. There are two towers that made up the classic outside look of the building. The turrets turn inward ever so slightly. It is said that the towers get their shape after the tent poles of the Turks who used to occupy this region in the late 1600s.

You will also want to visit the inside, as it contains some of the best paintings dating to the 1700s. Many of the wood carvings and alter pieces date back to that period. Currently, the structure is owned and operated by the Opus Dei (“Work of God”) part of the Catholic Church.

Why You Should Visit:
Definitely a good place to marvel at sumptuous Baroque architecture. Full of gold, marble, and finery!

Tip:
Each day from 3 till 3:30pm you can listen to live organ music here for free (donation only). An impressive way to admire this church!
Choir performances are also frequent, with for-fee events in the underground vaults.