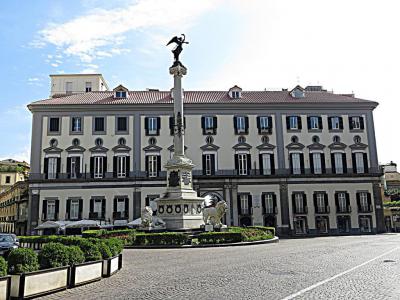 The Piazza dei Martiri or Martyr’s Square in Naples gets its name from the monument placed at the center. The monument was created to commemorate those who laid down their lives in three different uprisings in the city. It is located at the end of the Via Chiaia, a popular pedestrian street.

The Piazza dei Martiri occupies a site that was once part of the extensive gardens and orchards of the 11th century Abbey of Santa Maria a Cappella. Later, in the first half of the 17th century, the church of Santa Maria a Cappella Nuova was constructed here. It was demolished to make way for a square under the orders of Napoleon’s brother in law, Joachim Murat in 1812. The memorial column found in the square was moved from another location and four lions were added, each representing four different rebellions, the 1799 Neapolitan Revolution, the revolutions of 1820 and 1858 and the 1860 War of unification.

The Piazza dei Martiri, today, is a lively square that is popular with locals and tourists. Many high end stores are located around it. It is also the site of many popular clubs frequented by young and chic Neapolitans. It is also the location of the large Feltrinelli book and music shop that is popular with locals and visitors.
Image by aquila460 on Flickr under Creative Commons License.