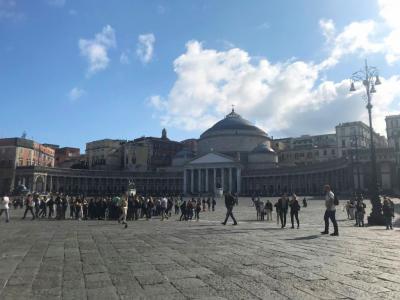 The Piazza Plebiscito is a square named after the plebiscite that resulted in the 1860 unification of Italy. It is the largest square in Naples.

The Piazza Plebiscito was laid under the orders of Joachim Murat, the brother in law of Napoleon who was installed as the King of Naples after the defeat of the Bourbon rulers. He ordered the demolition of an ancient abbey and a church to make way for the square. When the Bourbons returned to power after the defeat of Napoleon, Ferdinand I, the reinstated Bourbon ruler, completed the unfinished Piazza.

After World War II, the square was neglected and became a large parking lot until 1997, when it was restored to its former glory for the G7 summit held in Naples.

The Piazza Plebiscito has a semicircular shape. It has the Royal Palace at one end and the church of San Francesco di Paola on the other. The equestrian statues of the Bourbon kings, Ferdinand I and Charles III are placed in front of the church. Today, the square hosts New Years Eve and other festival celebrations and events like rock concerts. Large installations of contemporary art are also placed here periodically.
Image Courtesy of Wikimedia and Giorgio Visco.