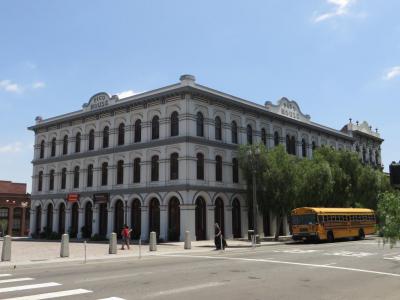 Pico House was a luxury hotel built in 1870 by Pio Pico, a successful businessman who was the last Mexican Governor of Alta California. With indoor plumbing, gas-lit chandeliers, a grand double staircase, lace curtains, and a French restaurant, the Italianate three-story, 33-room hotel was the most elegant hotel in Southern California and its opening was cause for much celebration.

Its time in the spotlight did not last very long. By 1876, the Southern Pacific Railroad had linked the city with the rest of the country and more residents and businessmen began pouring in. Pio Pico himself started having financial troubles, and lost the hotel to the San Francisco Savings and Loan Company. The business center of the city began to move south and, by 1900, the condition of the building began to decline and it was operated as a lodging house until it was acquired by the El Pueblo de Los Ángeles Historical Monument. The building was renovated and restored to its former glory and is once again the most magnificent building in El Pueblo and a California Historical Landmark.

Today Pico House lives on and continues to be sought after for special exhibits and events as well as for commercial use.
Image Courtesy of Flickr and Ken Lund.
Sight description based on Wikipedia.