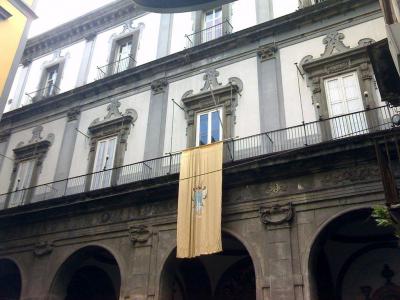 The Pio Monte della Misericordia is a small church located on the Via dei Tribunali in the historic center of Naples. It houses a small but significant art gallery that is open for public viewing.

The Pio Monte della Misericordia was founded by a group of seven Neapolitan nobles in 1602. It was called the charity brotherhood and was located in a small church near the stairs that led to the Cathedral of Naples. The brotherhood performed many charitable deeds like feeding the hungry, providing interest free loans for the poor, ransoming Christian slaves, visiting prisoners and burying the indigent dead. The church soon became too small for the charitable activities of the brotherhood and was demolished to make way for a new larger building designed by Antonio Picchiatti. It was constructed between 1658 and 1678. The brotherhood still exists and donates money to schools and hospitals, today.

The Pio Monte della Misericordia has many valuable works of art. The most famous work is Caravaggio's magnificent work called the Seven Acts of Mercy which is regarded as the single most important painting in Naples. It is found above the altar of the church. Besides this masterpiece, impressive works by Carlo Sellitto, Fabrizio Santafede, Luca Giordano and Battistello Caracciolo form part of the gallery.
Image Courtesy of Wikimedia and IlSistemone.