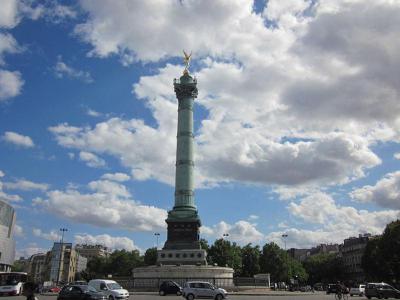 Bastille Square in Paris is what's left now of the once infamous fortress-turned-prison that stood in this place in the late 18th century. Initially reserved exclusively for the upper-class inmates, gradually this prison started to accommodate commoners, as well, although in the far less comfortable conditions than those afforded to the aristocracy, for which reason it acquired a bad reputation and was hated and feared, all at once. On July 14, 1789, the prison-fortress was stormed by a crowd of angry and armed people, upon which the prison governor first issued a ceasefire note, but then had to surrender and open the gates, seeing all the inmates liberated, thus marking the outset of the French Revolution. It was just a matter of days, after the storming, that a building contractor was hired for the demolition of the Bastille which, by November of the same year, was totally gone.

Now called Place de la Bastille, this square was established to commemorate those revolutionary events and to celebrate victory of democracy over tyranny. Special pavement stones here mark the original site of the fortress. The imposing July Column monument, dominating the square, commemorates another revolution – of 1830 – that lasted three days and saw hundreds of people die and resulting in King Charles X being replaced by King Louis-Philippe.

Centrally located, Bastille Square is perpetually busy. Adding to its popularity is also the near presence of the river Seine overlooking which are a number of benches, ideal for a quick stopover and having a bite while observing the surroundings – something the tourists quite like to do, actually.

There are also short river cruises running along the canal from the Bassin de l’Arsenal, passing through tunnels underneath the old foundations of the Bastille fortress and contemporary square, then re-emerging and passing through several locks before reaching the Bassin de la Villette, which is altogether quite an exciting way to see Paris from a different perspective!
Image by JSquish on Wikimedia under Creative Commons License.