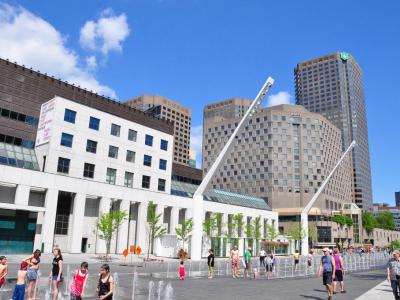 Place des Arts was an initiative of Mayor Jean Drapeau, a noted lover of opera, as part of a project to expand the downtown core eastward from the concentration of business and financial activity. The first part of the complex was inaugurated in 1963, at the height of the city's construction and architectural boom. The other theaters were added progressively, along with Musée d'Art Contemporain that can be found next door.

Taking up an entire block of the downtown core, the multi-venue arts center is now a home of four of the city's largest production companies – the Montreal Symphony Orchestra, the Opéra de Montréal, Les Grands Ballets Canadiens, and the Jean-Duceppe theater company. The site has undergone major reconstruction in order to include a 6th concert hall dedicated to performances by the Montréal Symphony, and to remodel the Grand Foyer, which greets visitors to the complex.

In the summer the Esplanade and adjacent street comprise one of the important outdoor sites of the Festival International de Jazz de Montréal, as well as of other cultural happenings and festival events such as the Montréal World Film Festival. The Esplanade's stairs are a choice spot for a meeting point or to simply sit and people-watch; in addition, there are jumping jet fountains and shallow pools nearby, surrounded by visitors cooling off, their feet dangling in the basin.

Why You Should Visit:
The place to be in Montreal from June to August! Great fun for young and old and there is something for everyone. The area is relaxed, yet full of restaurants and also good shopping; easily accessible as there's a metro stop nearby.
Image by abdallahh on Flickr under Creative Commons License.