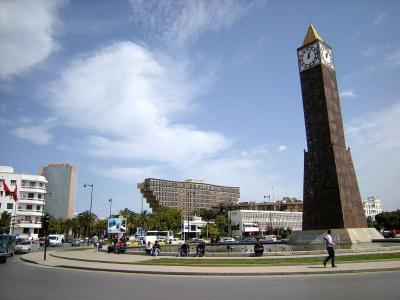 14th January Square is a commemorative square in honor of the Tunisian Revolution that began on January 14, 2011. The catalyst for the revolution was the self-immolation of Mohamed Bouazizi who was protesting mistreatment by the government. This was the beginning not just of the Tunisian Revolution but of the Arab Spring that took place in Libya, Egypt, Yemen, Syria and Bahrain.

The square was previously called Africa Square. It held the monument of Jules Ferry, former Prime Minister of France. In 1956, when Tunisia gained independence from France, the statue was replaced with an equestrian statue of President Habib Bourguiba who was the first president of Tunisia. That statue was removed after the president was ousted from office in 1987.

A clock tower was added to the square where the statues previously stood. It is surrounded by a reflecting pool and a fountain of dancing water. Following the 2011 revolution, the equestrian statue of Bourguiba returned to the west of the square on June 1, 2016.
Image Courtesy of Wikimedia and Leandro Neumann Ciuffo.