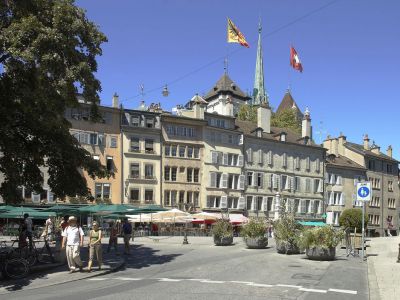 Place du Bourg-de-Four is one of central squares of Geneva and a top tourist sight that is important from both, historic and cultural standpoints. Unlike most squares of a rectangular shape, Place du Bourg-de-Four appears more like an hourglass, with its north side dominated by the imposing Palais de Justice, widening out until it finally splits into two streets (Rue de la Fontaine and Rue Verdaine) with a Lutheran church in between. The south side of Bourg-de-Four looks more like a square, with an 18th century fountain and buildings forming a harmonious ensemble, bordered by a small tree-lined promenade at the beginning of Rue de l'Hotel de Ville.

The square has been a popular gathering spot since the Roman times, when it was used as a marketplace and fairground by merchants. Its name apparently derives from the Latin “Forum des Burgondes”, which means Forum of the Burgundians, the east Germanic tribe that lived here in the 5th century AD.

Some of the buildings on the square were erected in the 17th century to accommodate Protestant exiles from France. The Lutheran community, present in Geneva since 1707, built in 1766 the first non-Calvinist church in the city to replace the old castle of Coudrée. They were allowed to do it on the condition that the building would not look like a church from the outside, therefore it does not have a steeple.

Surrounded with numerous stores, restaurants, galleries and upscale boutiques, today the square represents a cool place for a stroll or some shopping, meeting with friends, or a bit of socializing and relaxing. At Christmas, it gets romantically decorated with lights, becoming astonishingly beautiful.
Image by Wouter Hagens on Wikimedia under Creative Commons License.
Sight description based on wikipedia