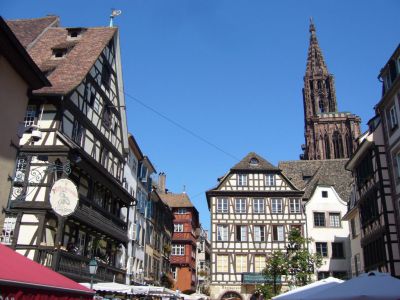 Place du Marché-aux-Cochons-de-Lait (French for “Suckling Pigs Market Square”) over the centuries has gone by many different names, featuring both German and French titles, reflecting the city's evolution and affiliation with the two countries.

Originally, back in 1240, it was known simply as Holzmerket (“Wood Market”), referring to the wood marketplace that used to occupy a vast space brought about by the emerging port activities in the Middle Ages. Then, in 1328, the area changed name to the more poetic Unter den Holzlüten (German: “Under the Wood Flowers”). In 1600 it became known as Holzstaden (German: “Wood Street”) and, in 1672, as Krautmarkt (German: “Herb Market”), followed by Pfährelmarkt (German: “Stake Market”, 1732), Alter Krautmarkt (German: “Old Herb Market”, 1735), Färelmarkt (1740), and Pfahlmarkt (1747).

In the 18th century, the French took over the renaming routine, progressively making it Marché aux Choux (“Cabbage Market”, 1771), Marché au Cochon de Lait (“Suckling Pig Market”, 1792), and Place de la Vertu (“Square of Virtue”, 1794). In the course of the 19th-20th centuries, as the city changed hands several times between France and Germany, the area subsequently came to be known as Marché-aux-Porcs (French: “Pig Market”, 1817), Place du Marché-aux-Cochons-de-Lait (French: “Suckling Pigs Market Square”, 1858, 1918), Neuer Fischmarkt (German: “New Fish Market”, 1872, 1940) and then Ferkelmarkt in 1944. The latter, though, proved to be short-lived, as the French swiftly made it back to Place du Marché-aux-Cochons-de-Lait in 1945.

Surrounded by cute half-timbered architecture, the square is indeed a charming place, well worth a visit. Located here also is a well, topped with a wrought iron structure, reportedly from the 18th century. Sources say, it replicates one of the four wells once found on the former Waffenplatz (now known as Place Kléber), which can be seen, in particular, on an engraving by Jean Hans, dated circa 1800.
Image Courtesy of Wikimedia and Jonathan M.