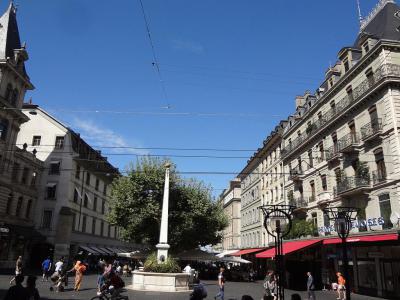 Once described as Geneva's “economic lung, urban matrix, and political arena”, Molard Square is one of the city's oldest commercial areas since the 16th century. The first mention of it as a port dates back to 1271. The word "molard" is the Latin for levee of earth and probably refers to a riprap, a dyke, that used to protect the port. In 1309, the first hard hall was built in the area, making it a commercial and customs port.

In the 16th century, the area around Molard became an economic center of the city fitted with warehouses, customs and foreign exchange offices, hotels, numerous craft shops, public writers and notary benches, printers, etc. Eventually, there appeared a fish and poultry market with new halls established in 1690.

At the center of the square is the Molard Tower (aka Clock Tower) which is a remnant of the defensive wall that used to protect the port of Molard in the Middle Ages. In 1906 it was adorned with a painted frieze taken from the demolished house of Rolle. The frieze features the coats of arms of the key actors in the Reformation history and a sculpture, called “Geneva city of Refuge”. Some find the male character depicted on the sculpture to bear a striking resemblance to Vladimir Lenin, although there is no proof that the author used Lenin as a model.

In addition to that, the square hosts a myriad of small boutiques and big brand stores, plus a number of excellent souvenir shops. Twice a week, Molard Square transforms into an open-air flea market organized by local authorities.
Image by MHM55 on Wikimedia under Creative Commons License.