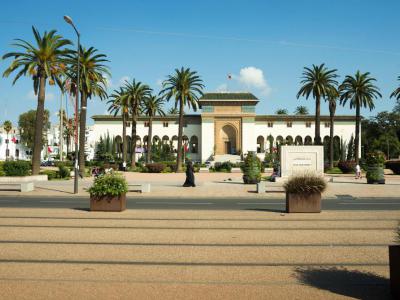 Mohammed V Square in Casablanca is popularly referred to as "Pigeons' Square." It seems literally carpeted with pigeons. They never go away. Are they waiting for something?

The square is named for Mohammed V, celebrated former King of Morocco. It has had other names: Main Square, Square of France, Square of Victory, Administrative Square and Marshal Lyautey Square. The square is just south of the the old city, in an area once occupied by the barracks of French Colonial Troops.

The plan to build a square was formed by Henri Prost and Joseph Marrast in 1916. It was destined to be part of the new "European City." Hubert Lyautey, the Resident General, was dreaming of Place Stanislaus in his native city of Nancy, France. He wanted the Mohammed V Square to be like that.

New buildings went up around the square in the style of Moorish Revival so liked by architect Henri Proust. On the sides are: the Court House built in 1923; the Military Circle built in 1925; the Bank Al-Maghrib built in 1937; the Central Post Office built in 1920; the Wilaya Building built in 1937; and the French Consulate-General built in 1922.

The Grand Theatre of Casablanca by Christian de Portzamparc was built in 2020 and the large circular fountain, the "Pigeons' Fountain", was repositioned as the square was renovated and repaved.
Image Courtesy of Wikimedia and Rigelus.