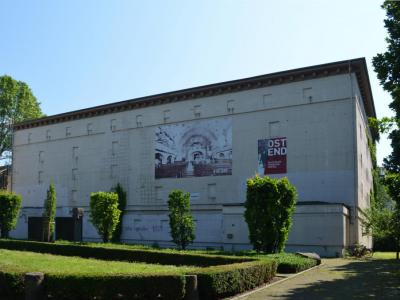 No. 6 Friedberger Anlage is the former location of a Jewish synagogue in Frankfurt that was deliberately destroyed by the Nazis.

The synagogue was built from 1905 to 1907 and was characterized by the transition style of reform architecture with elements of Romanesque and Orientalism. On November 10, 1938, it fell victim to an arson organized by the Nazis as part of the November pogroms of 1938. The police ordered to demolish the building out of the risk of collapse. The destruction began on November 17, 1938 and was finished on June 12, 1939.

In 1942-43, a five-storey bunker was built on the site. While the surrounding Ostend district was badly damaged by air raids, the bunker remained intact. After the war, from 1947 to 1965, it had served as a book storage and university library, and then as a furniture store, from 1968 to 1988.

Since the early 1950s, the Jewish Restitution Successor Organization had demanded the removal of the bunker and restitution of the property. Eventually, it came into the possession of the Federal Finance Administration, upon which the city undertook to erect a permanent memorial for the synagogue. The Friedberger Anlage Synagogue Memorial Site, designed by landscape architect Jeannette Garnhartner, was finally erected in the forecourt of the bunker in 1988. The bunker itself now houses a permanent exhibition about Jewish life in Frankfurt's Ostend.
Image Courtesy of Wikimedia and Karsten Ratzke.
Sight description based on Wikipedia.