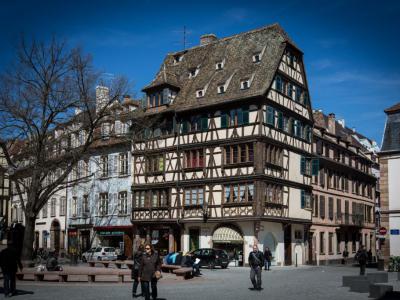 Tucked away in the quiet corner of Strasbourg's Grand Island (Grand Île), Place Saint Etienne is a small picturesque, medieval square lined with several half-timbered houses from the 18th century. The square itself was built in the 11th century under the name of "St. Pierre-Large"; the current name was assumed in 1400.

In the center of the square, shaded by two lime trees, there is the Meiselocker fountain installed in 1929. This work by Ernst Weber was offered to Strasbourg by the city of Munich in exchange for the Vater Rhein fountain presented to them.

Once a place for sessions by the local Assembly of Nobles, this square is now a popular gathering spot for Catholic students, especially so since its redevelopment in 2014.
Image Courtesy of Wikimedia and Claude TRUONG-NGOC.
Sight description based on Wikipedia.