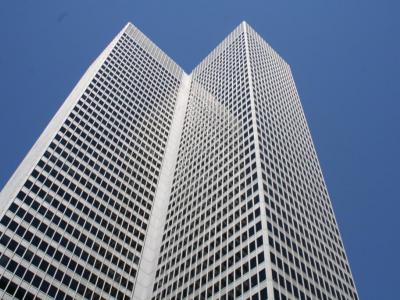 One of Montréal's most controversial projects, Place Ville-Marie was part of Mayor Jean Drapeau's plan to create a new, modern metropolis. Its name was, in fact, chosen by the Mayor himself (after that of the former French colony founded in the 17th century), while its offices were meant to house Canada's largest bank. The city's financial district thus moved from Old Montréal to downtown, inside the largest and most complex office building the world had ever seen.

Designed by I. M. Pei (who would go on to become one of the 20th century's most recognized architects) and Henry N. Cobb, the international-style construction was completed in 1962. Then tallest in the British Commonwealth, it also held the distinction of being the city's only cruciform building. Below ground, the complex became a nexus for Montréal's Underground City, the world's busiest, with indoor access to over 1,600 businesses, numerous subway stations, and tunnels extending throughout downtown. A counter-clockwise rotating beacon on the rooftop lights up at night, illuminating the surrounding sky with white horizontal beams that can be seen as far as 50 kilometres (31 mi) away.

Tip:
If you visit during Christmas, you will find a huge Christmas tree at the central court. At any time of the year, do not miss out the attractive abstract sculpture by Gerald Gladstone, called the "Feminine Landscape", also located at the center.