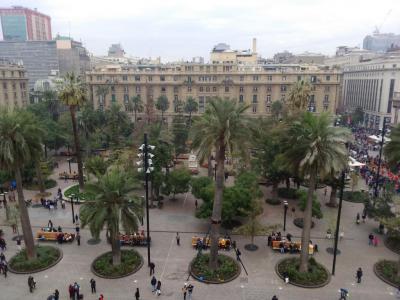 The Plaza de Armas is the heart and soul of Santiago de Chile. It is the centerpiece of the initial layout of Santiago, which has a square grid pattern. This urban design was accomplished by Pedro de Gamboa, which was appointed by Pedro de Valdivia in 1541. Surrounding the square are some historical buildings, including the Metropolitan Cathedral of Santiago, Central Post Office Building, Palacio de la Real Audiencia de Santiago and the building that serves as the seat of local government for Santiago, which was formerly occupied by the Cabildo of the city before being remodeled. The Square de las Armas is a beautiful plaza in the center of Santiago that is popular with tourists. The statue of the founder of Santiago stands in this square as well as the Metropolitan Cathedral. Chilean artists can often be seen selling their works in the plaza.

Why You Should Visit:
Great spot to both explore and rest; old and new coexist here, in both architecture and people...
There are important statues sprinkled throughout, as well as important buildings from the colonial Spanish era surrounding it.
Not the cheapest place to eat, but houses some nice souvenir stores with fair prices.

Tip:
Do look closely at the different palm trees as a number of different varieties are planted here.
Image by andresumida on Wikimedia under Creative Commons License.
Sight description based on wikipedia