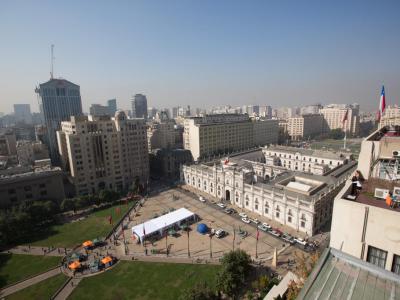 The Plaza de la Constitución is named in recognition of the ten Chilean constitutions. The square is surrounded by government buildings such as the Ministry of Foreign Affairs, the Ministry of Finance, the Ministry of Justice, the Municipality of Santiago, and the Chilean Central Bank. The square was updated in 1983 with paths, a grassy area, trees, and an underground parking lot.

There are two fabulous water fountains in the southern part of the square. Visitors will find five statues commemorating influential Chileans. Diego Portales founded the Chilean republic. Other statues are of Chilean presidents. Pedro Aguirre Cerda governed from 1938-1941, Jorge Alessandri was preseident from 1958-1964, Eduardo Frei Montalva was president from 1964-1970, and Salvador Allende was president from 1970-1973.